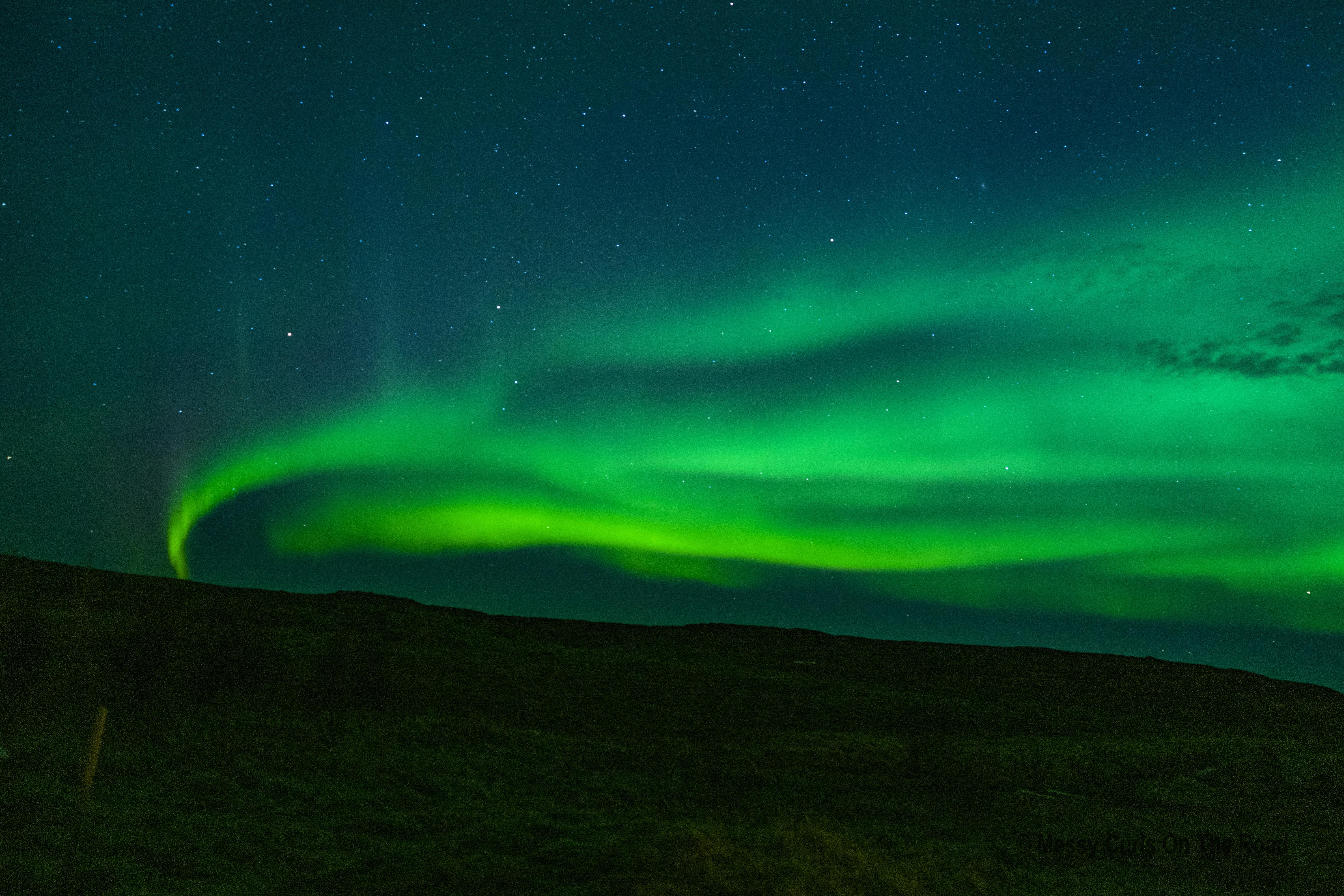 One of the main reasons why I wanted to visit Iceland was the Aurora Borealis, and this is why I was pretty scared of going in the end of February, when the Spring already starts to come and the nights get shorter.

To see the Northern Lights you will need long dark nights, with a clear sky, so winter is obviously the best period to be sure to find them. Despite this we have been quite lucky, experiencing their amazing view 6 out of 9 nights we spent on the island.

But I have to say that at the beginning none of us sounded this exited and we were rather disappointed on our second night, when taking a picture of a completely black sky, with only a couple of clouds showing, everything appeared to be green in the photo.

Yes, because you have to know that with a long exposure shot, the camera lens can catch way more light that our eyes can during the night and this is why the colours of the aurora were showing in the picture but they were impossible to see for us.

That night I feared that all the pictures of the aurora I have seen in my life were just a technical artifice and that I would never see such an amazing view in real life.

Luckily I was wrong, in that case the only problem was that the northern lights weren’t that strong and in fact in the pictures you can see that they looked more like a green diffused light (made stronger by the long exposure of the camera) rather than clear stripes moving across the sky like we are used to see the aurora represented. 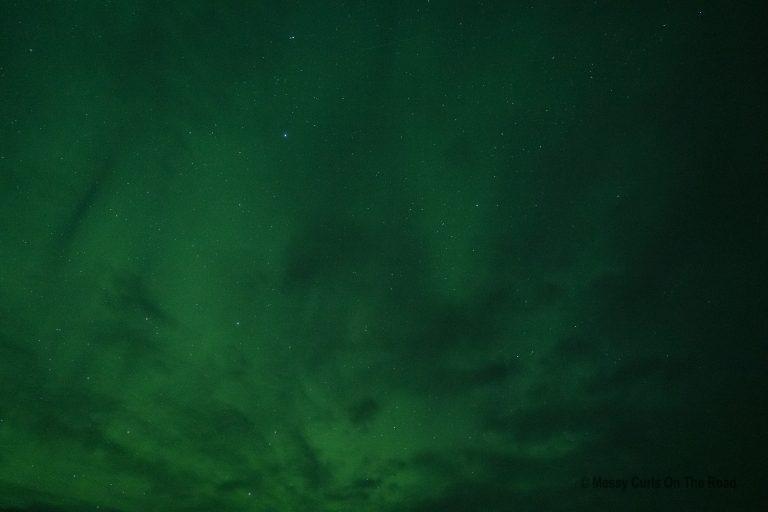 Looking back at my experience in photographing the aurora, I realised how much reading about it didn’t really help until I was there with the northern lights in front of me and I had to adjust my settings in order to get the best results possible.

The first thing that made the whole process quite hard was the wind. If you are planning in visiting Iceland you have to know that the wind can be amazingly strong, we saw cars with windows that had been broken after being hit by the stones brought by the wind, this is why you have to be extremely careful and have to be sure your tripod is stable and strong enough to resist to it. 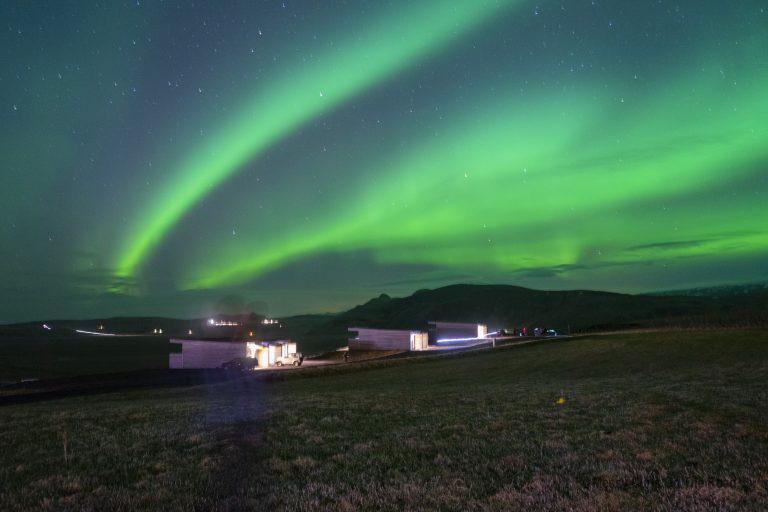 Then the things get even worse if you are trying to get a self-portrait, because of course you will have to leave your camera standing by itself on the tripod while you wait in front of it for the photo to be taken. I solved this problem hanging a weight at the hook at the bottom of my tripod, but still, take attention to it! 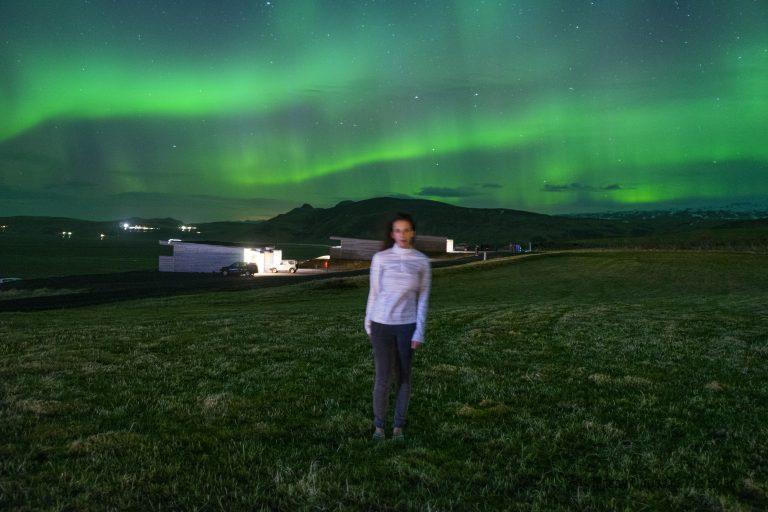 Still speaking about technical issues, to obtain the best result possible I would advice you to use the manual focus, thing that can be made quite difficult by the fact that you will be shooting at night, with not many reference points clearly visible on your screen.

Because focusing to the infinity(turning the focus ring of the lens until its very end) never gets you to have a sharp sky, some people advice to focus to the furthest thing you can see (for example a mountain) during the day and then sign with a pencil or a piece of tape the focus point on the focus ring to be able to find it again at night. I still never tried this technique but I simply focused zooming on a bright star to make sure it was on focus and made several attempts until I was completely satisfied. 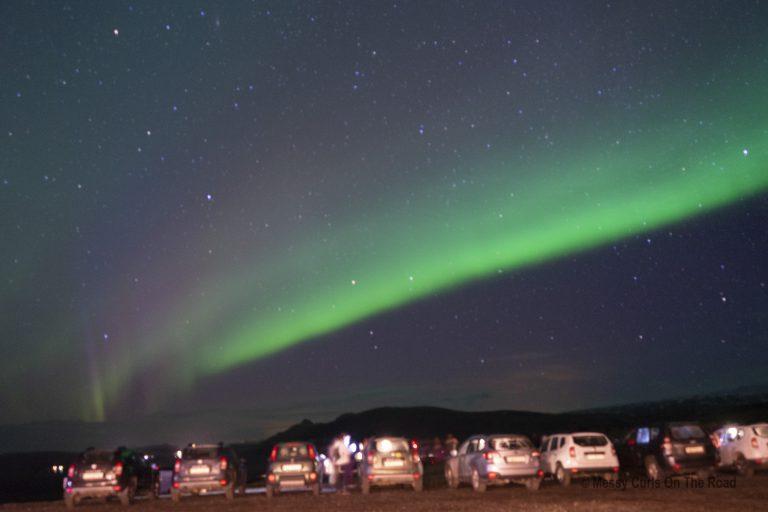 Another thing I already mentioned is the forecast, because if there are any clouds in the sky you won’t be able to see the northern lights clearly, so before leaving for a night hunt be sure you check the weather conditions because it could result in a complete failure. 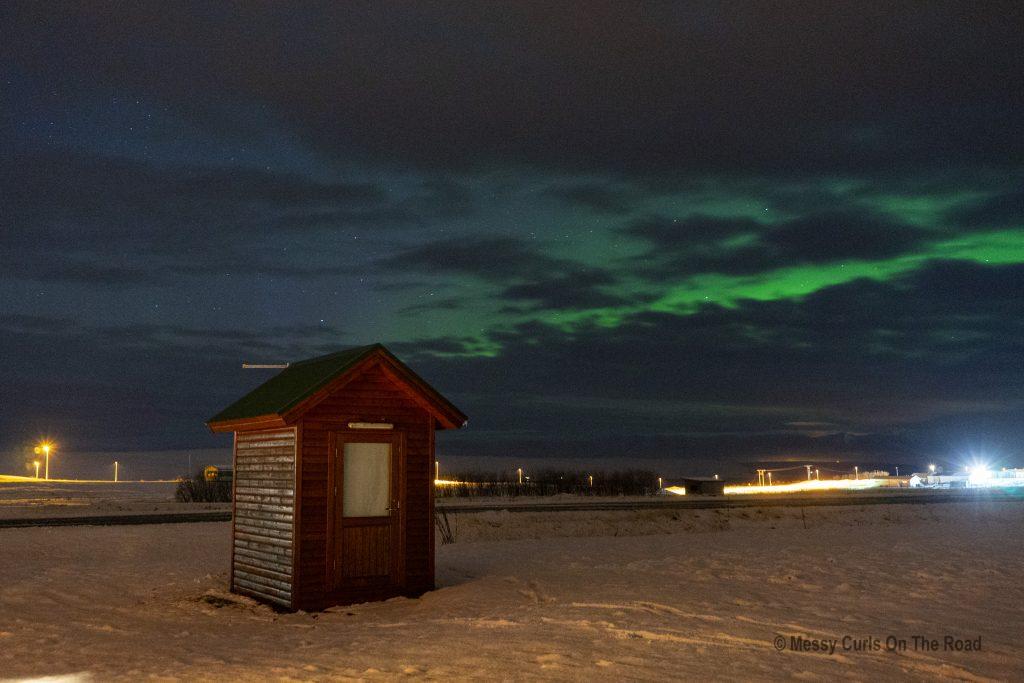 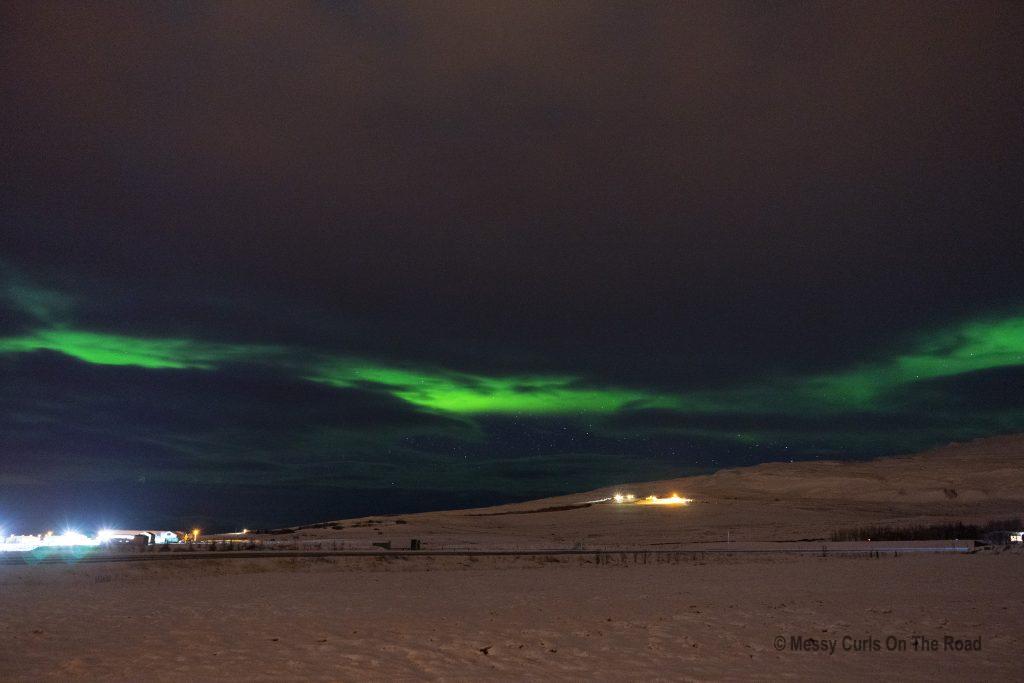 Indeed, it is really important to find the right spot to see the northern lights. It will be extremely rare you will be able to see them from towns or cities so I would advice to go looking for them by car or sleeping in a champing spot or cottage far from the busiest centres (the buildings’ light pollutions will made it harder for you to see the aurora).

Being outside in the wild can also help in another aspect of building your photograph. In fact one of the things you should keep in mind is that your picture will be way more effective if you manage to include some landscape in it instead of the “mere” aurora. You can find many examples on internet, you can try with some trees, with the mountains, if you are on the beach you will get some amazing shots of the sea lighted up by the northern light. Just don’t limit yourself pointing your camera to the sky, try to use the environment that surrounds you or even your own figure (I saw some pretty amazing photographs of people lighted up by the photographer using a torch while the long exposure shot was taken). 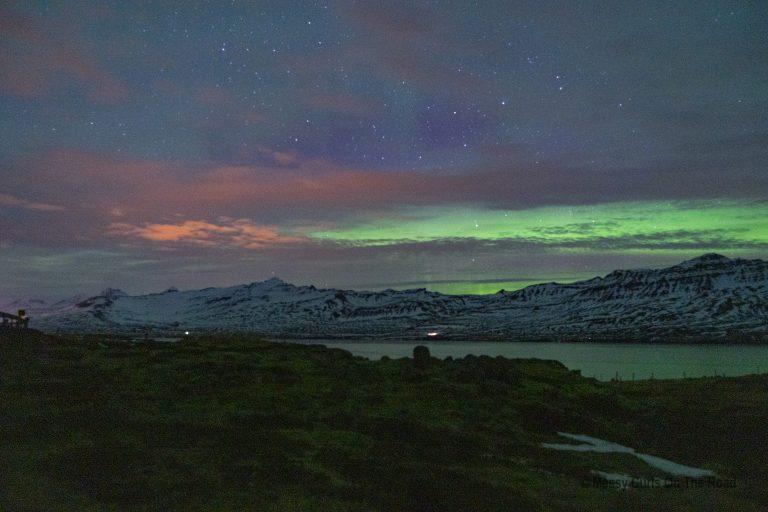 Last but not least, think of the aurora not just as “light” but as something that goes with the wind. It moves a lot and way faster than you can think. You won’t always have all the time you need to change your settings or to reframe your picture so you have to adjust your technique to be quick enough to keep up with her.

And of course take your time to put the camera in your bag and just enjoy the view, because I can guarantee that it is a show you will never get tired of! 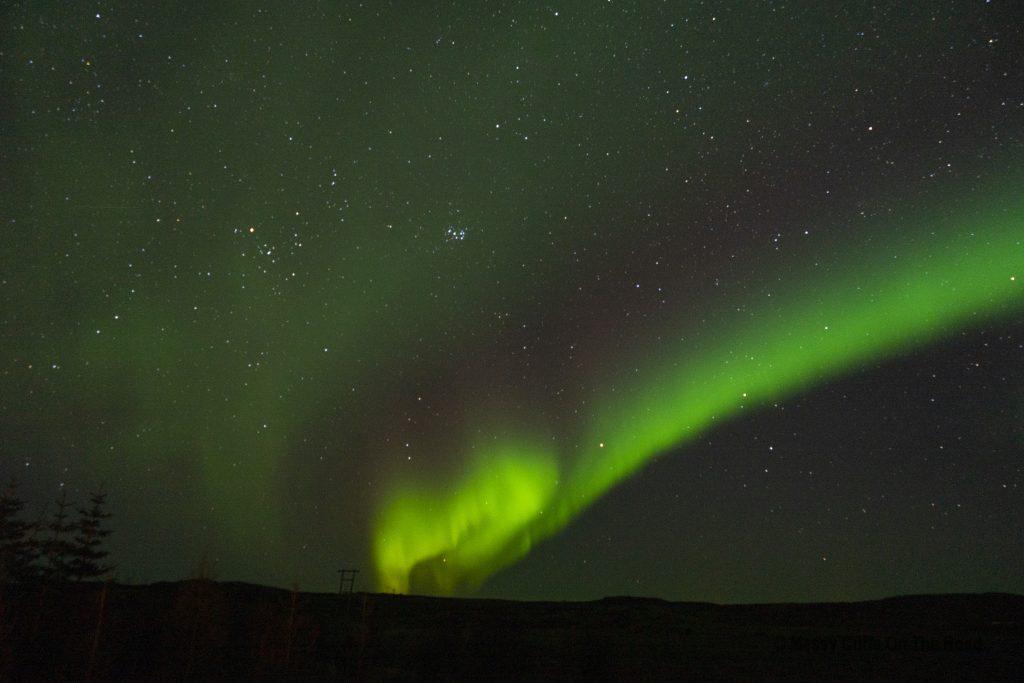