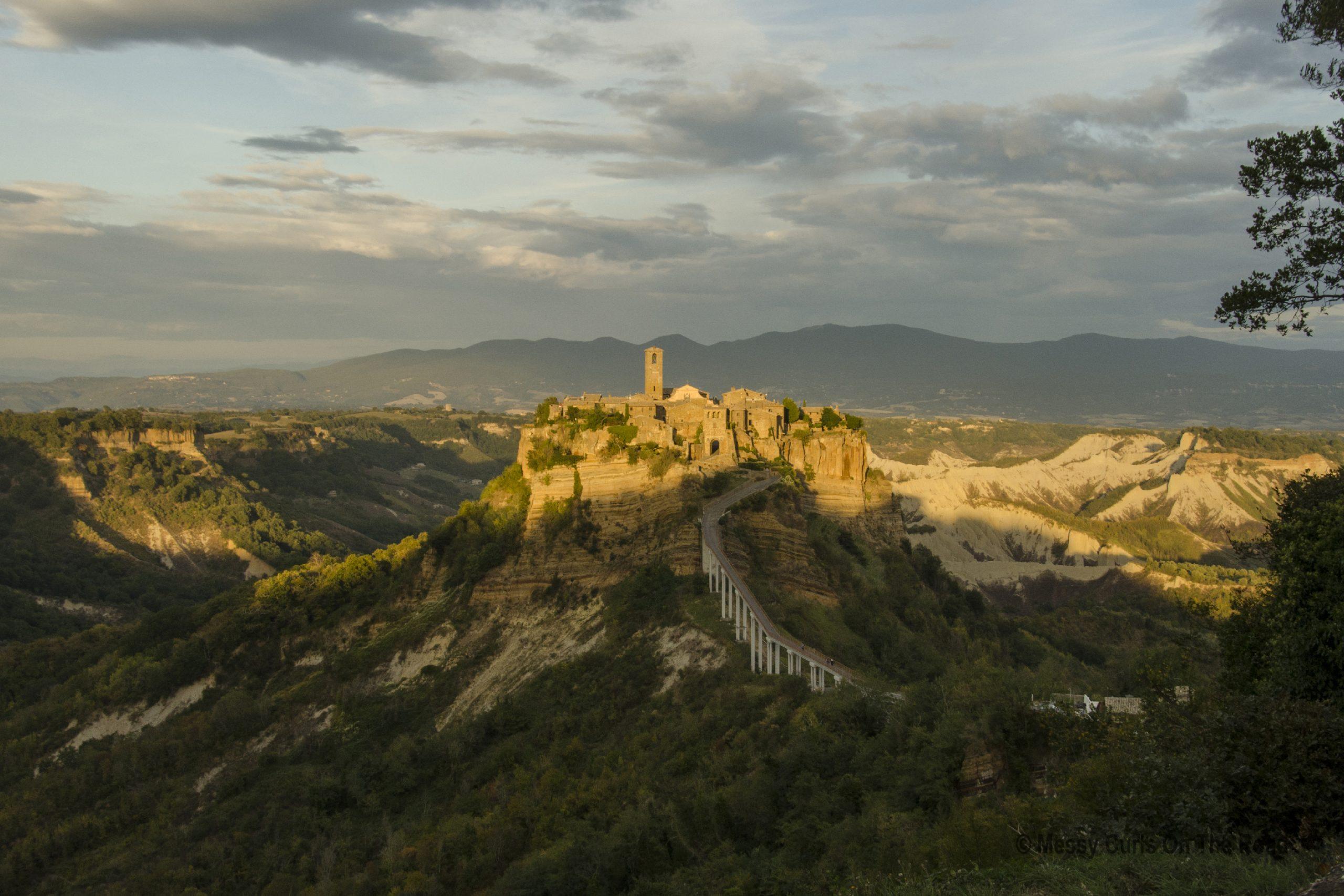 Civita di Bagnoregio is a town situated in Lazio, in the centre of Italy, founded by Etruscans more than 2,500 years ago.

At the end of the 17th century, the citizens were forced to move to Bagnoregio (a separate larger town) because of a major earthquake that accelerated the old town’s decline.
Today Bagnoregio continues as a small but prosperous town, while Civita became known as “The Dying Town” because of its continuous and inexorable decline.

Civita is indeed situated on top of a plateau of tufa (a soft volcanic stone typical of central Italy) which was formed after a series of volcanic eruptions thousands of years ago. The city is in constant danger of destruction as the edges of the plateau collapse due to erosion , leaving the buildings to crumble as their underlying support falls away. 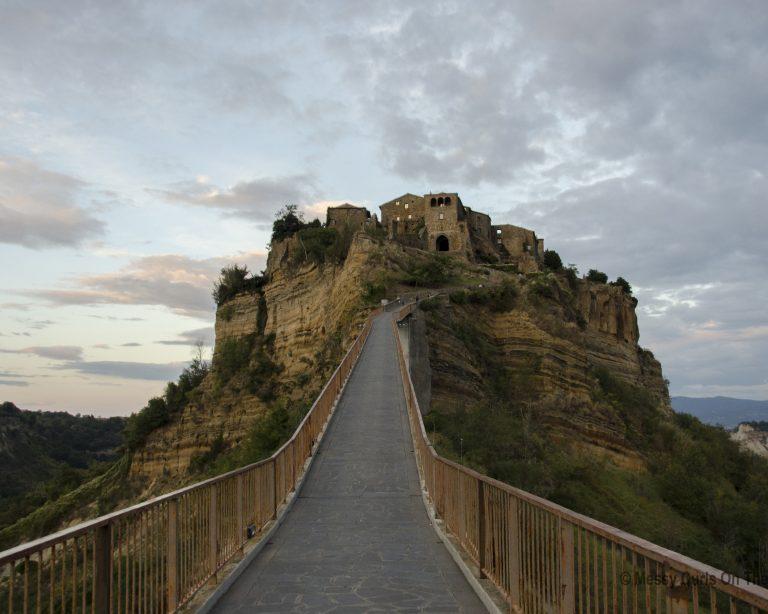 The only way to reach the town is through a 275m-long narrow pedestrian bridge that crosses the valley that surrounds Civita (picture above). It has been built in 1965 using reinforced concrete, after the old one had been destroyed by the Germans in 1944, during the Second World War.

If you fear the height this can be a tricky part as it takes quite long to cross the bridge and when it’s windy you can feel the structure shaking slightly, but once in the town you can admire a unique and amazing landscape.

The population today varies from about 7 people in winter to more than 100 in summer.

There is no post office, no supermarket, no chemist and no hospital, only 50 stone houses, a cathedral and a few pedestrian streets. 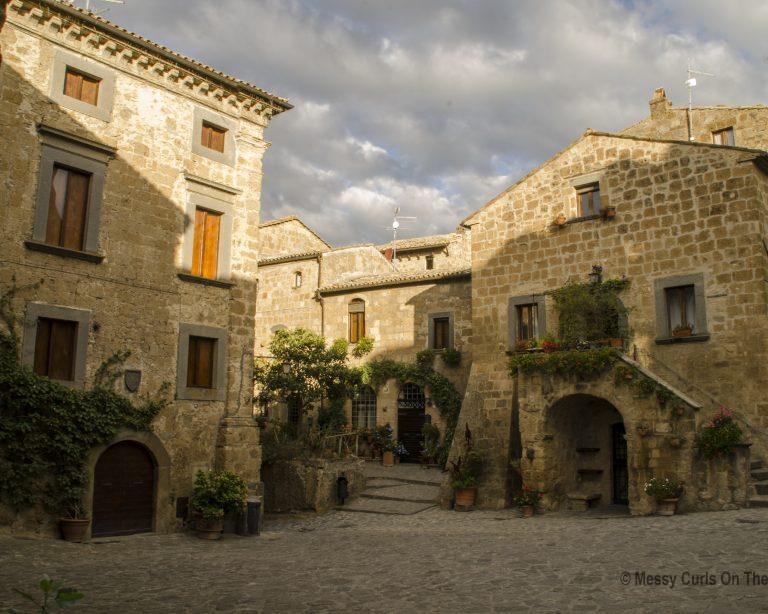 At the moment, the residents are the only ones that have the permission to ride motorcycles along the only bridge connecting the town with the surrounding area; everybody else (mainly tourists) has to walk for about 15 minutes from the car park before getting to the town.

But it hasn’t always been like this and these measures have been applied only because the huge amount of tourists visiting the town every year coming by busses from the surrounding areas, were fastening the decay process of the town and damaging the too narrow bridge.

Today only if you have your car’s licence plate registered you can park right in front of the bridge, otherwise there are several car parks in Bagnoregio main town. Then, before crossing the bridge you will find a small wooden office where you can buy your permit to visit Civita (€5). Nowadays tourism is indeed the only sustenance factor for the city that helps its  conservation and development, this is why I find that paying a small fee to enter is fair.

The mountains all around are very peculiar as well; they are called Calanchi and are another manifestation of the erosion constantly acting in the area.

Here the rain and the wind shaped the ground and the mountains in a way that makes them look like a sort of light grey lunar terrain.

A small curiosity is that for several stories’ locations authors took inspiration from Civita di Bagnoregio, one of them is for example the Japanese animated film “Laputa, Castle in the Sky”, by Hayao Miyazaki.

In an interview he indeed confirmed that he drew inspiration from Civita for his movie.

Something else that I found interesting but that I didn’t find any information about, is the fact that in Jonathan Swift’s book (Gulliver’s Travels, written in 1726), is described a similar floating island named in the same way, Laputa. It was a circular flying island long 4.5 miles in diameter maneuvered by its inhabitants in any direction using magnetic levitation.

If you want to plan your visit at Civita there are some events worth taking into consideration: 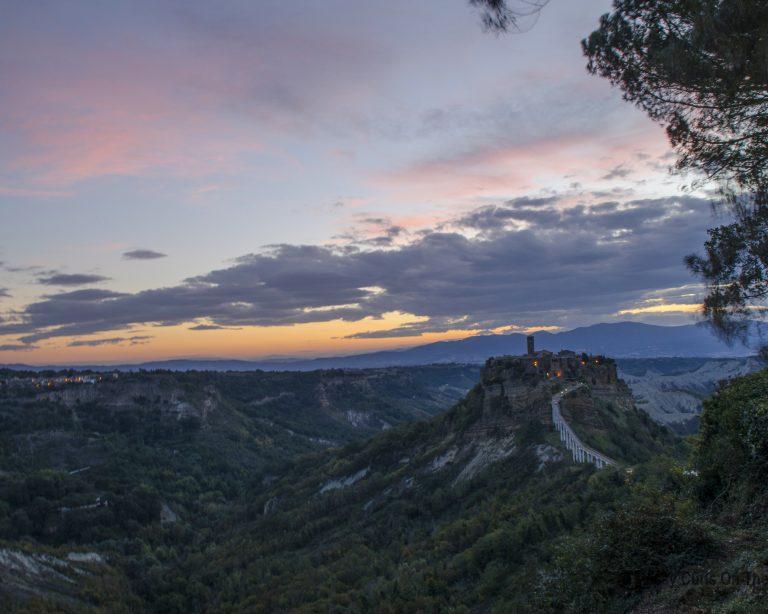 Krakow, Auschwitz and the Wieliczka Salt Mine