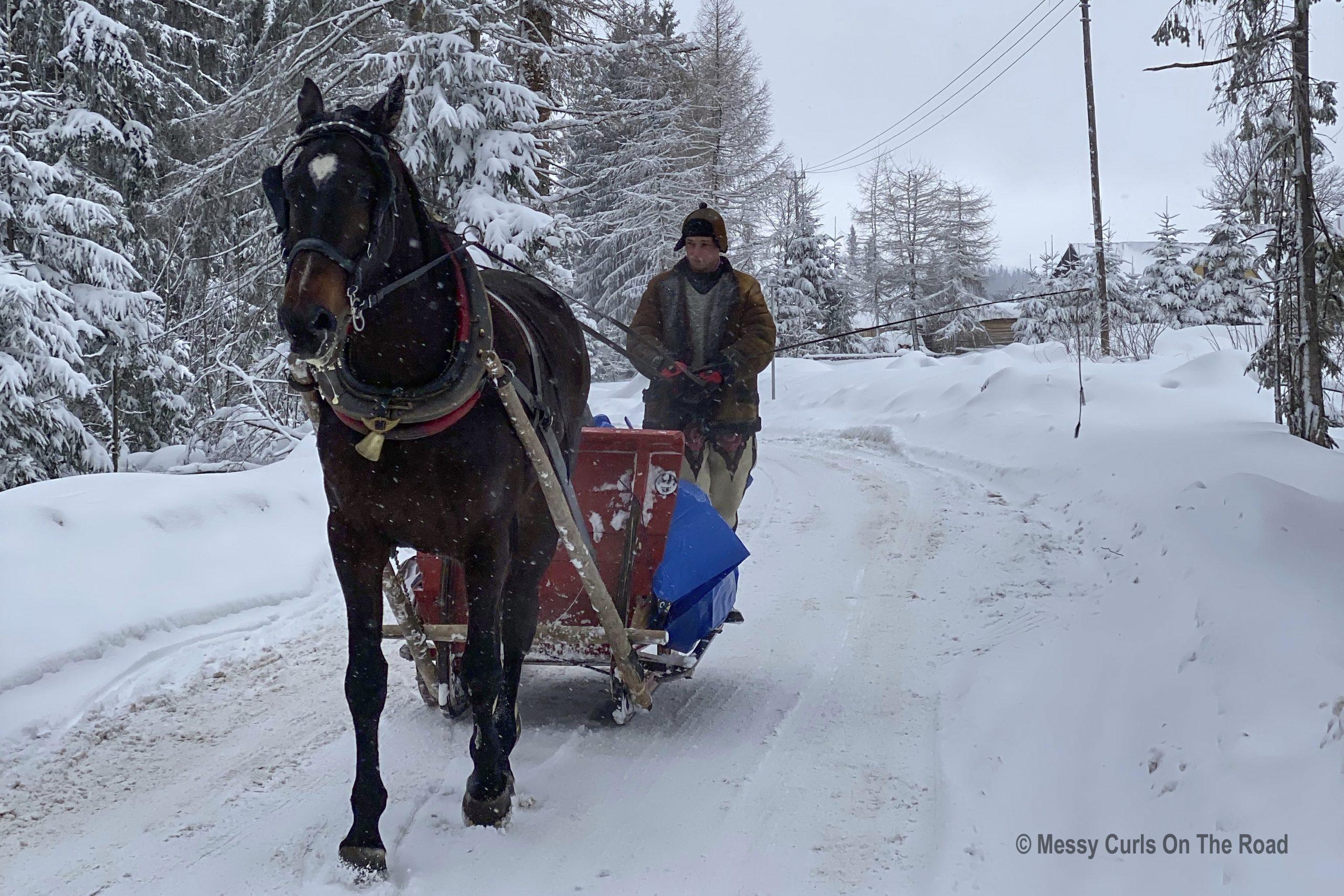 Zakopane is considered to be Poland’s winter capital, it is indeed a town situated at the foot of the Tatra Mountains, in the extreme south of the country.

With an elevation that varies between 750 and 1,126 metres, the town is about 2 hours from Krakow, near the Slovakian border. Here you will find plenty of attractions and activities to do during both winter and warmer months; furthermore, the strong touristic presence guaranteed a strong development (and therefore a wide choice) of anything regarding this sector, such as hotels, spas, restaurants and ski resorts.

To explore the city we decided to spend 2 full days visiting as much as possible, but let’s go by steps.

Even if I usually plan quite a lot and I am usually really organised during my trips, in this case we haven’t been too lucky.

Once leaving the Flixbus we used to get to Zakopane from Krakow, we had indeed the first setback: even if, when checking on my uber app from Krakow, it looked like there were drivers working in the area, once on the place nothing was coming up on it and it looked like Zakopane wasn’t really covered by the platform.

Acknowledged that, we walked about 50 metres to get to a taxi station, right next to the train station and really close to the bus one, where we arrived.
There, we found only one driver that, after examining the b&b’s address on my phone for a while, accepted to bring us there. The place wasn’t in the town centre; thinking we could use an uber or a bus I decided to book a place higher on the mountain, to get a bit more of the winter atmosphere, unfortunately the traffic and the taximeter made the journey not so enjoyable.

Despite this, I have to say that on the next morning we had quite many pleasant surprises, but for now I will stick to the ones relating to the “transport” topic.

After walking for about 10/15 minutes in a landscape that we loved, we indeed found ourself in a completely different reality from the derelict one we thought. We were right in the middle of the ski resort and from there a funicular line could bring you to Zakopane town centre in a matter of minutes for just a few zloty (1 pound = 5 zloty), making our wandering around much easier, quicker and definitely cheaper!

As I mentioned before, I opted for a b&b that wasn’t in Zakopane, but slightly outside of town, in an area called Gubałówka. This was partly because I wanted to enjoy some nature other than the city itself, but also because I remembered the pleasant experience of staying in a house outside Aosta (Italy) during a trip and having really pleasant walks descending the mountains in the morning reach the town further down the valley.

Unfortunately I underestimated the quantity of snow we would find once there, that made really difficult moving around in the less frequented paths of Gubałówka, but as I said we have been lucky enough to find the funicular just a short walk from our accommodation.

Here I will have to point out something else. I said Zakopane is a really touristic destination, what I wish I knew before is that it is mainly a touristic destination for Polish people and not so much for internationals, which made the necessity of locals to speak English almost inexistent. Of course this isn’t a huge problem, nowadays you can book everything by phone and translate or look online for any dish on a menu you do not understand, but in our case communicating with the b&b owner has basically been impossible and at some point we just gave up and accepted to just figure out things by ourselves along the way.

Where we staid, in Gubałówka, there wasn’t too much to do other than skiing, so if you are not going to do that you will not have too many alternatives other than visiting some souvenir stands, but I would suggest you do at least one short visit here to admire the landscape and to have dinner in one of the amazing local restaurants up in the mountain.

Regarding Zakopane itself, wondering around its streets is already really pleasant itself. The winter atmosphere, the Christmas stands and the wooden chalets are amazing to look at.

But other than this, having two full days, we decided to spend one evening doing a sleight ride. It as been something absolutely magical which I would recommend to try, but first I want to give you some practical advice.

I won’t say which company I booked it with because I wasn’t really satisfied by it, but I can tell you that there is plenty of choice and many people organising them for different prices and offering different services, so choose wisely. The problems for us started with the bus coming to pick us up more than half an hour late, than it took about another hour to get us to the place, where we found out the sleight wasn’t for 2 as I saw in the images but for 8 people. The plan was to go in the woods and have some sausages cooked on a camp fire but we basically stayed only half an hour on the sleight (not in the woods at all) and then headed back to initial point and had a sausage each to eat there. Then heading back in town has been even more confusing, because we were many groups all together and the busses came at different times, without a list of names or anything like that, so we all ended up a bit mixed and in the end had to walk from the hotel where the shuttle left us to our own place. 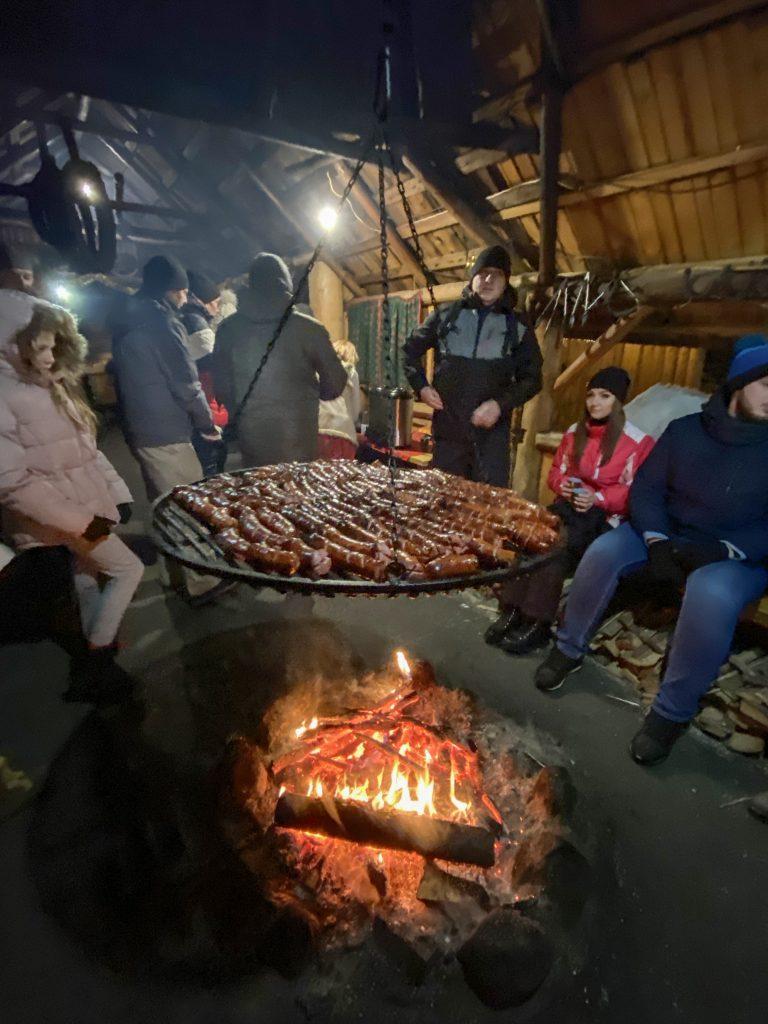 Moving to much more pleasing experiences, the food was amazing. Polish dishes are just perfect for winter weather and in Zakopane we had the opportunity to try some new styles of dining.

Firstly I would like to mention, Góralska Tradycja, a fine dining restaurant that offered amazing food choices but where you can also admire Zakopane’s traditional architecture.

Then, moving to Gubałówka I would suggest you to visit the Restauracja Tarasy, located up on the mountain, offering huge portions and an amazing view. If you go during the Christmas period, the decorations make the atmosphere even more magical and if you go there for dinner you will see the whole town lighted up. Here as I said, you will have to find your own way to communicate, I just looked up on google maps for some pictures of their dishes as pointed them out to the waiter, because the menu was in Polish only and my phone translator wasn’t helping out much, but in the end everything was amazing (in the pictures you will see our favourites: noodles soup, meat dumplings and a huge cutlet!).